This Little Bag of Dreams

O body swayed to music, O brightening glance,/How can we know the dancer from the dance? 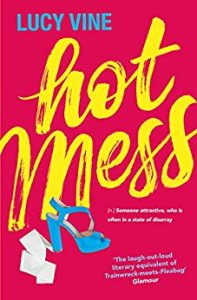 If you’ve ever woken up feeling like The Apex of Shite, next to a hungover questionable decision and the remains of a kebab, then congratulations, you are a hot mess.  Other telltale signs of a hot mess include supposedly sorted friends, a job which you are desperate to leave and a flat on a road which may well have inspired AC/DC’s Highway to Hell.  But do not fear!  Other hot messes are out there, most notably in the form of Ellie Knight, whom you will meet/drunkenly walk into in Lucy Vine’s debut novel, which, you’ve guessed it, just so happens to be called Hot Mess.

I’d been seeing a buzz build up around Hot Mess for a while, and follow Vine both on Twitter and through her gutsy Grazia columns, so was thrilled to receive a review copy.  And reader, from its hot pink cover to its porn-writing character (more on that later!), it does not disappoint.

Taking my copy to Brighton with me, I sat down at a dubious looking pub and gulped down half the novel, much like our hapless protagonist might down an Apple Sours.  It opens on Valentine’s Day, traditionally a day loathed by single people – hell, make that all SANE people – and Ellie is waiting for a date, arranged by her well-meaning but miserable sister, who never appears.  The novel continues in this vein, Ellie’s life, not measured out in Eliot’s coffee spoons, but in Tinder dates.  We meet her mostly hideous colleagues, at her mostly hideous job; we see her avoid her flat because it is unforgiveably hideous, and inhabited by a flatmate with a penchant for empty shower gel bottles.  What saves the novel itself from being unbearably depressing is how funny and relatable it all is.  Plus, Ellie’s widower dad’s homage to E L James, relayed to us in handy chunks, is hilarious.

And Vine nails it the whole way through, she really does: who hasn’t drunk-dialled a would be date, or slept with a housemate, or been harassed endlessly by their friends and family with the question, ‘Have you met someone special?’?  It gets right to the core of what it is to be human, in fact, never mind female and single.  Witness the scene where Ellie has fallen out with her best friend, Sophie, and Ellie’s acknowledgement of how awful it is that life goes on, despite dark times: it’s almost like life is mocking her.  Luckily for her, and for us, life gets bitch-slapped, and whilst she may still be hot at the novel’s end, she is no longer a mess.

Many thanks to Elaine Egan at Orion for the review copy.